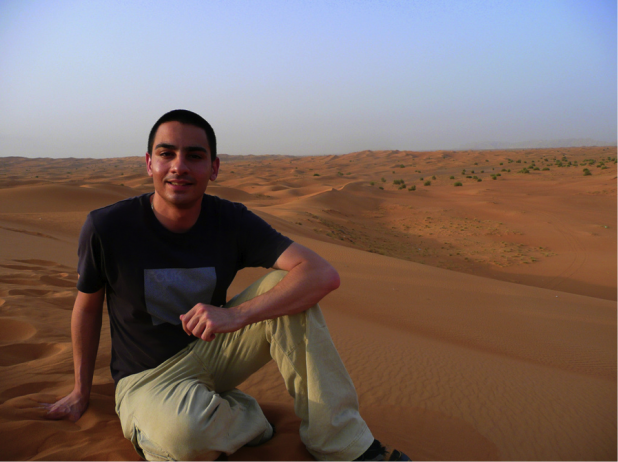 I’m Dr. Stephann Makri and I have spent the last 2 years interviewing people about serendipity – asking them to tell me stories about their memorable experiences. In my last guest blog article, I told you my own serendipity story, from when I took a holiday in bustling Bangladesh. Now I’m going to tell you another story – this time from my day job as a researcher at UCL Interaction Centre in London. If you haven’t done so already, do visit www.serendipitystories.net to read more memorable examples of serendipity. I’d also urge you to share your own story on the site – I’d love to hear more of them!

I was on my way to a conference in Australia and I decided to stop for a day in Dubai, and when I got to Dubai, I’d already booked a hotel, and it was one of these airport hotels, it a Premier Inn. So I wasn’t expecting anything grand from the hotel itself, but one thing they did offer was a free shuttle bus from the airport to the hotel.  I thought, ‘well, that’ll be nice, because I might want to sleep for a little bit and then go out and see some of the city, and see if there was any possible culture that I could get from a city that was so young where it wouldn’t have been my first choice of places to stop.’

At the bus stand, waiting for the shuttle bus, I met a woman who told me that she was an artist, and she had also come from London, and she had come from a different flight, she was going on the next day to Shanghai, and she was going to (I think) do some research there related to an art project she was working on.  So we got talking, and because there was a London connection we got talking pretty much straightaway. She told me quite early on that she was an artist.  She was also a photographer and I have an amateur interest in photography, so I enjoyed talking to her.  As we were both staying at the same hotel, we talked in the bus about what plans we might have for that day, and she was quite amenable to doing similar things to me, so I said, “well, why don’t we both go together?” and we did.

So we walked around in the peak summer heat of Dubai, like crazy people (no-one else was out in that kind of heat), and I mentioned in the evening I was going to go to the desert.  They do dune buggy stuff where they put you in a 4×4, deflate the tyres, and then drive up and down like crazy people, in the sand dunes.  And although I don’t really like being a typical tourist, it just seemed like it was something that was different to do that I could fit into my day.  And so I thought, I’ll do that and make the most of the day, and then the next day I’ll fly to Australia, and she liked the idea of that, so she came along with me. So I felt as though that meeting had been fairly useful for her.  And over the course of the day she told me a bit about her artwork, and I just said, as you would, well, I’d like to come and see that sometime in London, let me know, let me know when you next have an exhibition somewhere and I’d like to come and see.  And that was genuine, but it was also a bit of being polite – I didn’t know whether I would actually make it to one of her exhibitions. We spoke about her artwork, we swapped contact details, and we broadly kept in touch when we got back.

Then, about a month ago, I was taking my regular tube journey home, and I saw a poster at my local station, where I’d got off after a day of going to the office. The poster was for some short artistic films that were being projected at a London tube station. And they were on rotation, so there were different artists that would do different films. And I noticed that there was a name on the poster that matched the name of the woman I’d met a couple of years ago in Dubai! I thought, well, that’s probably quite a common name, but also thought, ‘well, I need to interview creative people, and I don’t know if this is the right girl, but I can always send her a message and you never know.’

So I contacted her and it transpired it was the same person. So I then arranged to go and see her film, which I managed to do on the last day that it was screened, and then we arranged and met up. We then met up and she helped me out by providing a very useful interview about serendipity! Then afterwards, on our walk to the underground station, she asked me how I analysed my interview data and was really interested in my approach of qualitative data analysis – so much so that I gave her an informal qualitative data analysis tutorial later in the week at my office at University College London.

You’ll notice some patterns in this serendipity story and the previous one I told you (about my travels in Bangladesh). Firstly, they are both stories within stories; in ‘Bangladesh Buddy,’ the main ‘serendipitous’ storyline is about friendship (rather than about me going on a successful daytrip). In ‘Interesting Interviewee,’ the key storyline is about establishing a professional relationship in an unlikely desert location (rather than about me and the interviewee enjoying each others’ company for the day). They are also both stories that are bi-directional – we can frame the ‘valuable outcome’ of serendipity from the point of view of each of the characters involved. In Bangladesh Buddy, both Rahib and I became friends, he came to London with my visa advice and I got to go on an exciting day trip to a mangrove forest that I probably wouldn’t have otherwise. In Interesting Interviewee, we had a fun day together in Dubai which led to an interesting interview on serendipity for me and a crash course in qualitative data analysis for the interviewee. The point here is that serendipity is subjective. In the words of one of my interviewees, “the same event might be serendipitous for me and a disaster for someone else.” (Computer Science Student).

Now I’m not suggesting that Rahib or my interviewee regard me meeting them as disastrous, but I am suggesting that we need to stop worrying about the subjectivity that is inherent in serendipitous experiences and start to embrace it. Serendipity feels special and magical because it’s slightly different for different people. It’s slippery and difficult to pin down and the fact that it’s so elusive makes it more interesting. So when we tell ourselves serendipity stories, what we are really doing is reframing our memories – applying a serendipity frame to our experiences in order to try to rationalise them and in order to explain them to others. So next time you hear someone tell you a story about chance, good fortune or just ‘something funny/weird/interesting/exciting that happened to me today,’ listen carefully – because they might be telling you a wonderful serendipity story without them even having consciously labelled the experience as serendipitous.