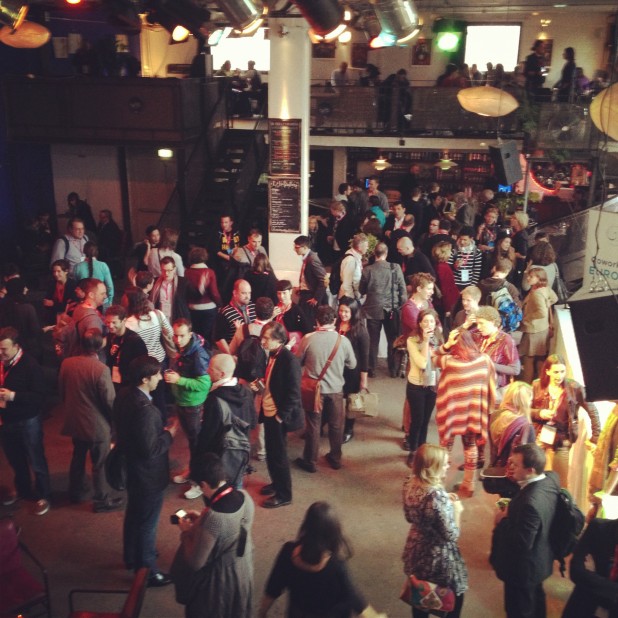 I just spent the last few days participating in Coworking Europe 2012 conference in Paris. This was the 3rd  conference so far organized on yearly basis and my first time to attend. The reason I was there was twofold, I am really keen to follow the coworking movement while I see a lot of potential in that. It supports naturally the freelancer movement, which will have a revolutionary impact to all business structures in years to come. My other reason to attend was to share my experiences of building communities and ”coworking ecosystems” where also serendipity can be harnessed.

Surely serendipity and coworking are themes that resonate well, but still I was a bit surprised that serendipity actually was the word in the conference appearing in all  the keynote speachees. And yet again we encountered the challenge, that because a word ”serendipity” was intrepreted in so many ways by the attendants there is a chance it will be misunderstood and become a hype word and therefore loosing it’s real character. On the other hand I was happy because this all created a real demand for my ”Harnessing serendipity” session the following day. My introductory slides of the session will be found here, the workshop itself was compressed to a miniworkshop, and unfortunately we had not really time to report the outcome as such, so I genuinely wish that the process and the discussions during the miniworkshop will help the attendants to understand and get curious of serendipity.

The event itself was pretty international, 280 participants coming from more than 30 countries, also countries like US, Canada, Brazil, Australia were presented. Surprisingly nobody else from Scandinavian countries was there (Finland, Sweden, Norway or Denmark), so I am wondering how that would be understood – coworking not taking momentum in those countries? Or do Scaninavians feel they know the coworking scene well enough, no need to attend? Most of the attendants were owners of coworking businesses, so the approach overall was very pragmatic.

My main conclusion from the event is that coworking is taking momentum – for sure, now more than 2000 spaces in operation throughout the world. But the whole movement is looking for a direction, there are so many business modells, so much excitement and expectations, but not too many success stories yet, neither from the operator’s side or from the customers.  Some of the more established players have been in business 5-6 years and the eldest one – as far as I know – eOffice in Soho, London just celebrated the 10th anniversary last Spring -.- congratulations to Pier Paolo Mucelli! His professional attitude towards the business is something that all the other operators could learn of.

I was impressed by some new initiatives and like to mention Soleilles Cowork, where we had one workshop on Saturday. It is a beautifully decorated space with a great ambience and it’s located in a very central spot in Paris. The owners are enthusiastic but also have enough business background to manage the operations properly. Their unique business idea is to support female entrepreneurship and so far that has been an attractivity factor itself. The other very interesting initiative is Desk Union, a brand new business founded by a dynamic young lady Victoria Arnold and DeskUnion is focused on negotiating with property owners to make use of their access spaces and turn them to coworking spots. DeskUnion operates in UK (mainly in Scotland) but the business model, if the proof of concept is achieved, can be scaled also globally.

The keynote day and the parallel panels offered some great stuf as well. I was especially excited to hear Professor Richard Collin to explain his Enterprise 2.0 approach. It was so refressing to notice that you have like-minded people, who really have fascinating visions about how the business world will be evolving. His presentation can be found here.  And surely his Enterprise 2.0 Institute is an initiative to follow. I just loved his opening phrase about existing institutions: ”I see our institutions shining with a brilliance similar to constellations which astronomers tell us they are dead since a long time” (originally by Michel Serres). What a brave statement! This also reminds me about the arrogant attitude of one Director of Regus on one panel discussion…..

The event had also great sessions from the corporate world. Jennifer Magnifold from Zappos explained how they turned Las Vegas into one of the coolest place in the US for entrepreneurs. Eze Vidra, the Head of Google London Campus shared their experiences of just recently opened seven storey building really hitting the coworking wave. I had a great chance to discuss with him also afterwards and will be visiting them in near future, it’s a cool initiative and may be an emergent opening for these kind of campuses to pop up in attractive metropoles.

Last but not least I like to mention Jellyweek , a global initiative, which was nicely introduced by Anni Roolf and Leila Pais de Miranda. This kind of grassroot level activities are one of the strenghts of global community building, I am really looking forward to participate and see what kind of serendipitous enconters it will provide. In the photo below  is Leila and the famous Jellyweek 2012 Quilt -a real collaborative effort with many narratives in it.

It’s always fascinating and inspiring to be among enthusiastic people for a while, it gives you a great dose of extra energy and widens up your thinking. If I had some serendipitous encounters in Paris will be seen in future. Surely I had great discussions but why I am saying so – well because the value of some encounters, discussions or emergent collective ideas will probably be seen weeks, sometimes even months afterwards.